I've got two books to talk about this week, both of them reprints. One is an early download from Pride Publishing, the other is a self-pub. The second one is even Halloween themed.

Love in G Minor hasn't been available for quite a while and I'm very happy to have it out once again! While this is a couple bringing in a third like Three of a Kind, it is nonetheless a very different story. It's fun exploring that dynamic in varied ways. 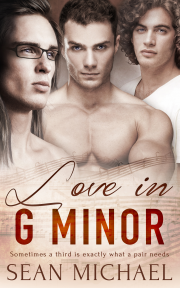 Sometimes a third is exactly what a pair needs.

Stephen and Jack play a lot. These long-time lovers are constantly testing boundaries, fighting a delicious battle for control. When they meet young waiter Benji, they’re both intrigued. Such innocence doesn’t come along often and they decide Benji is the best thing on the menu.

Benji feels like he’s in over his head with this sophisticated pair, but it might be Stephen’s musical and artistic temperament that makes three a crowd. Can Jack and Stephen hit just the right note? Or will Benji end up out in the cold?


The Law of the Jungle was written a while ago - it was in the Fur and Fang anthology. I do love a black Jaguar with green eyes, the black just makes the green so much more. 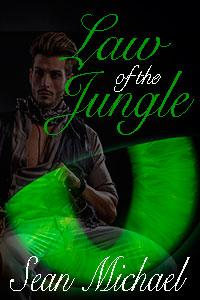 Captain Marco is delighted with his crew's gift of a big, emerald-eyed cat. He's astounded and even more happy when he finds that the cat is also beautiful as Abrigio - a man. For his part, Abrigio is used to being caged and abused and trust is not easily given. But will danger end any chance of a relationship between these two men before it can even begin?