Posted by Sean Michael at 6:50 PM No comments:

I was all set to do a Random Friday post when I realized that it was actually Friday.

So, Throwback Thursday it is!

How about Bent - the very first Hammer story I wrote. It came in at 120,000 words, and it would have been double that except I had a deadline and had to stop writing. Then Billy and Tanny showed up and this one book was suddenly a huge series with the most wonderfully noisy bunch of characters...

BTW, when I searched "bent sean michael" before it gives me my resutls, it asks did I mean "beat sean michael." I suppose that's appropriate ;)

Marcus knows Jim is his minutes after meeting the snarly, jumpy ex-professor at the local bookstore. He thinks Jim is a natural submissive, someone who needs order and discipline in his life to help with Jim's anxiety and bad health habits. So Marcus decides to pursue Jim relentlessly, because even if Jim's mouth is saying no, his body is saying yes. 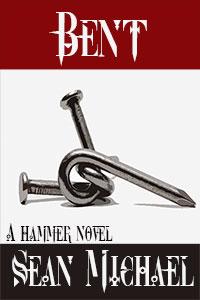 There's a lot more to Jim than meets the eye, and Marcus will have to be careful. Jim knows what it means to lose everything, knows what it's like to be without friends or family. Jim feels broken, and knowing that he likes the kinds of weird things Marcus wants to do to him only makes him scared that he's losing his mind.

You can buy it at Amazon.

The Eager Boy, the next book in the Iron Eagle Gym series is now available to pre-order at Dreamspinner Press! It'll be available for download on April 24th. There might be a smutty excerpt for it on Smutterday....

I talk about the cover over on Love Bytes Reviews today - thank you to them for hosting me.

This is book six, but can be read as a stand alone.

Eight months ago Robin Secoya left his lover and master, Stack Lobond, because he didn’t believe Stack really cared about him. He was sure that for Stack, any warm body would do, and Robin wasn’t willing to be just a warm body anymore. 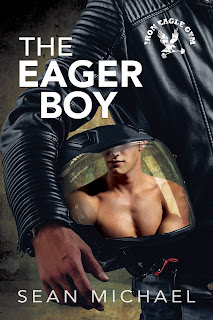 A chance meeting at the Iron Eagle Gym brings them back together, and old feelings aren’t far from the surface. They decide they can’t pass up a second chance at romance. But this time, it isn’t just Stack’s demanding career as a big-cat vet putting strain on their relationship. Robin also has a new job that takes up a lot of his time.

Will their kinky love affair crash and burn a second time, or can they find the balance that will allow the passion between them to flourish?


Sean
smut fixes everything
Posted by Sean Michael at 5:51 PM No comments:

Last week I watched Underworld 1-5. The movies are varying degrees of bad and good.

When you watch them one after the other, some things stand out. Like the first movie takes place in and around New York (one assumes thanks to the subway scenes). Then the second movie takes place directly after the first and yet is set in eastern Europe. Then there's the fact that they totally dropped Michael from the last movie (did he do smething to piss the producers off between movie 3 and 4? because he was barely in 4 and then in 5 they just dropped the whole thing of her finding him. I mean they did a wee bit at the end of 5 mentioning him but that was it.

One thing all the movies suffer from is scenes that are very dark. Why do movies do that? I know they're trying to create atmosphere, but it drives me crazy when movies are so dark you can't really see much of anything. I'm like don't you want me to be able to see this movie you made? The 5th movie was especially bad for this. I could barely see anything but shadows and outlines a lot of the time. What the hell? Were they ashamed of the locations they filmed in? Was the lighting just too expensive for their budget? Or maybe the lycan make-up was ass this time around. It's hard to enjoy a movie when you can't fucking see it. Yeah, the darkness to the point of only being abe to see muzzle flashes and spots of candle light through most of the show pissed me off more and more. And I woujld say don't bother with #5 based on lack of being able to see anything. Don't waste your time.

The first movie I had seen before - back when it first came out and I might have liked it better this time around than when I saw it the back then. The second movie wasn't bad and the third goes back and gives us the history we see hints off through the first two. They probably should have stopped there. The fourth diverts from just the lycan and the vampires and brings in 'humans'. I don't think it was a good decision. I will give the 5th movie that it goes back to lycans versus vampires, which is what the franchise does best, but like I said, I can't at all recommend the fifth movie because I literally could not see thalf of it.

Bah. It left a bad taste in my mouth.

The most annoying thing about these movies is that they've got huge potential. A big back story, an awesome female kickass heroine. They could be so much better than they are.

Posted by Sean Michael at 12:30 AM No comments:

My BFF BA Tortuga is currently in hospital, and my thoughts and prayers are with her. So I want to dedicate today's top ten list to her. You can find BA's books on her website and really, you can pick up any of BA's books and be assured of a great read.

10. Racing the Moon - first of the road trip series - this is a fun and sexy and crazy series
9. Bombs and Quacamole - how can you miss with a title like this?
8. Private Dancers - an oldie but a goodie featuring an exotic dancer!
7. And A Smile - I love all the Roughstock series, but Coke is my man and I love him so.
6. Two Cowboys and a Baby - BA does cowboys with babies so well. I love this one!
5. Just Like Cats and Dogs - shfters! biting! so much fun!
4. Terms of Release - this one is hard, but wonderful
3. Fighting Addiction - these two musicians are yummy
2. Ever the Same - I got to beta this one. There's just something about blind characters...
1. Rain and Whiskey - Shane and Galen are my all time fave BA characters. I adore these guys.

I picked up the BluRay of Justice League and watched it over the weekend.

There will be spoilers, so don't scroll down if you don't want to see them.

So I'd heard a lot about this movie. About how good it was and how it was the best DC universe movie so far, plus, you know, Jason Momoa. So I was very much looking forward to it.

Now, it was a good movie and I enjoyed it, but Wonder Woman was a much better movie. And, it had nothing on most if not all of the Marvel movies. It was fairly slow to start with, Batman is still pretty unlikeable, although I did enjoy the fact that they acknowledged that.

The Flash was neat, but it was a bit weird seing someone in the role as I am used to the Barry Allen on TV.

Wonder Woman was awesome as usual.

Superman is too good. It makes him less interesting of a character, imo.

While Jason Momoa is so lovely to look at, there wasn't enough of a backstory for him - I'm looking forward to the Aquaman movie to change that.

The whole fight scene when they first resurect Superman drove me a bit nuts. They do love pitting their superheroes against each other and letting them beat the shit out of each other. I prefer when they're working together to beat the bad guys, like Steppenwolf.

As I said, I did enjoy the movie and there's plenty of things that were fun about it. But it had been built up for me and that is never a good thing because it means the movie has a lot to live up to. 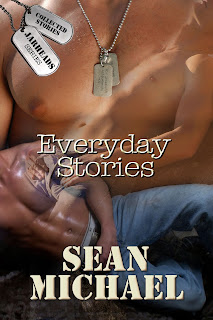 Thank you to everyone who entered to win ebook copies of the entire Jarheads series. I used the random number generator and the winner is Robyn Diebolt. Robin, please send me an email to seanmichaelwrites @ gmail . com (without the spaces) and let me know what format you'd like the book in. I have pdf, mobi and epub.


Sean
smut fixes everything
Posted by Sean Michael at 7:54 AM No comments:

I love cooking shows, and more than that, cooking competition shows. So I figured it would make a great topic for a top ten list!

10. Guys Grocery Games. The 'special' episodes like when the judges cook are my favorites of this one.

9. Halloween Wars. Pumpkins, cake, sugar work, this one has everything.

8. Worst Cooks in America. I like the regular version of this one more than the celebrity one. I love how competitive Anne is.

7. Cutthroat Kitchen. The best thing about this one is how much glee Alton takes in throwing bizarre and outrageous sabotages at people. The worse it is, the more he likes it.

5. Halloween Baking Championship. I do love the halloween version of this.

4. Holiday Baking Championship. The holiday one is my favorite of these!

3. Chopped. Ted, the judges, the baskets. I especially love the 'specials'.

2. Top Chef Canada. Love the Canadian version of this one more than the US one.

1. Masterchef Australia. I just adore the Australian version of this show. The accents, the judges, the lack of meaness from judges and among the contestants. I just wish that Gusto would air more than two seasons of it!

Sean
smut fixes everything
Posted by Sean Michael at 11:12 AM No comments: