On Saturday I did one of the few activities that I enjoy when it gets this hot - going to a movie. I can remember as a kid, when we were very lucky, we would get to go to a movie during the hottest days of the summer. We didn't have a/c at home, so this was an incredible treat.

Anyway, on Saturday I went to see Spiderman: Far From Home.

I really enjoyed the movie. It made a great stepping stone from the Marvel movies we've had from the first Iron Man to Avengers: End Game to the new ones that are going to be coming up.

I thought that Peter's doubts about jumping in as an avenger, especially as Iron Man's 'replacement' were very well done. He's still just a high school student, in other words a kid. He doesn't want to have to assume this huge mantle of responsibility or put his friends in danger.

I enjoyed MJ - she was great. I especially loved the morbid facts she obsessed over and brought up all the time.

The action was good. The storyline was fun. A great addition to the fanchise.

A few years ago I started a new series called Modifications - meant to be super kinky. They are all to be stand alone. Granted, so far I've only written the first one, but it definitely fits the super kinky bill as it involves pony play. I just might have to rus 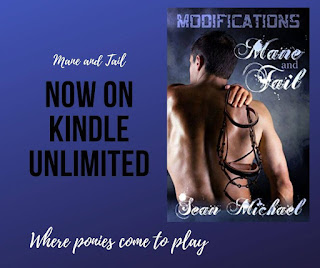 I've just put the book on KU, so you can get it through that or on Amazon.

Eric Martin is a successful businessman, but he’s lonely, he’s stressed, and there’s something missing from his life. At least that is, until he meets Daryus at a conference. Daryus promises he can offer Eric all his fantasies come true. A second meeting at a bar one night, leads Eric through a door into a world where he suddenly finds himself as the ‘pony’ of groom Soren.

Soren is a groom of human ponies who is working off his debt to a demon by training men in pony play. He enjoys his work a lot and one day hopes to have a pony of his own as a reward for all the good work he’s done and to celebrate the payment of his debt. When Eric appears in his stall, Soren believes that day has finally come.

Eric can’t believe the stables he finds himself in are real. His pony fantasies are just that – fantasies. Not only that, he’s never shared them with anyone, so how could Daryus have known? Between Eric’s confusion and lack of experience, Soren has his work cut out not only training Eric, but convincing him that this is real and that Eric doesn’t ever need to go back to his old world.

With a little demon magic and a lot of care, Eric and Soren just might find everything they need to be both happy and together.


Sean
smut fixes everything
Posted by Sean Michael at 4:34 PM No comments:

Yesterday I went to see Yesterday. That was fun to say. This is the movie where the whole world forgets that the Beatles ever existed except for this one guy.

The movie was cute. Sad in parts, funny throughout. If you don't like the Beatles, you won't like it because there are a lot of Beatles songs.

Yes, there was a happy ending - a very happy ending, thanks in a large part to that sage John Lennon. It was very fitting.

I enjoyed it a lot!

Posted by Sean Michael at 12:23 AM No comments:

Meet the Winter boys – Todd, Tommy and Troy. Can these triplets each find their happily ever after?

Todd lives in Northern Ontario and works as an adventure guide, aided by his best friend Smokey the malamute. It’s his dream job, and life is pretty good until a deep winter tour brings five executives, including Todd’s ex, to his neck of the woods. 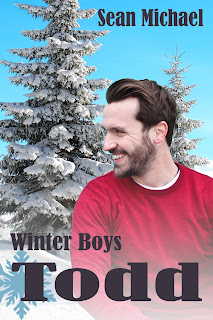 Simon is working the job of a lifetime, but he’s living in a big city where he knows very few people and he’s lonely. On top of that, one of his co-workers has made his work environment less than comfortable. The last thing he wants to do is spend time in the northern wilderness with four of his fellow executives, including the man who clearly doesn’t like him. When he discovers that their guide for this ill-advised bonding exercise is his ex, it feels like the universe is playing a cruel joke.

Forced proximity helps both Todd and Simon remember why they were together in the first place, but the things that saw them ending their relationship are still factors. They’ll have to find a solution that works for both of them if they have any hope of getting their happy ending.

Todd whistled up Smokey and she came bounding out of the woods to the cabin. His tour group was scheduled to arrive soon and he wanted her inside before the helicopter landed. She was a beautiful grey malamute who’d been with him for four years now. His only constant companion.

He kissed the top of her head and offered her a chew. She grabbed it and went to sit in her bed, where she made short work of the treat before curling up and putting her nose on her back paws. Todd went back to making sure he had their supplies equally distributed between the six backpacks. He had a company president with four of his VPs coming for two weeks in the wild to “bond.” Lord help him.

He hated when the prissy city boys came. They were grumpy, unhappy, and generally tough to deal with. Not to mention it was the middle of the winter and there wasn’t going to be any relief from the cold. He wasn’t sure they really understood that. Toronto was way warmer than it was up here.

Still, they brought in the cash, and that was important. And these guys were coming in early enough that they could start out after a quick meal of chili. He liked starting them off with a hot meal. He also liked starting them off sleeping rough—that way they didn’t bitch about the accommodations in the cabin. Somehow they always expected they’d be starting out from a luxury hotel or something.

He shook his head. He would wait and see what this batch were like. Maybe they would surprise him. Smokey chuffed at him. “Yeah, I know. But we can hope, right?” At least they usually liked his dog.

He heard the ’copter whirring overhead. Okay, time to go to work.

He slipped out, closing the door to keep Smokey in until the ’copter was gone again. He stayed against the cabin as it landed in the clearing in front of his home, offloading five men. Waving to Bill in the pilot’s seat, he hunched against the wind from the blades and headed for the execs, holding out his hand to the one who looked like the big boss.

“Hello there. Kix Middleton. This is my team—Sam Lowers, Bob Gruene, Simon Lord, and Arthur Williams.”

Simon Lord. No, he couldn’t have heard that right. No way. That would teach him not to actually look at the signed release forms when he printed them up. “Good to meet you, Mr. Middleton. Welcome to Winter Getaways.”

“I thought we’d start off with a hot meal and then head out before we lose the light.” He ignored the other execs and led them to the cabin, holding the door for them.

Smokey jumped up and began barking. He whistled at her and got her next to him and quiet. She growled deep in her throat, her hackles rising. Well, then. This was that Simon Lord. The asshole who’d dumped him.

Sean
smut fixes everything
Posted by Sean Michael at 10:49 AM No comments: