I thought I'd list some of my favorite Hammer Couples. Now, I have a hard time picking favorites, especially with my own writing (my favorite is almost always the last couple I wrote) but I thought I'd choose couples who were the most fun to write.

10. Devon and Barny from This Old House. I've made these guys number 10 because technically they are from a side series - Box of Nails. But they are members of the Hammer Club and they started the entire Box of Nails series, which is another super fun one to write. 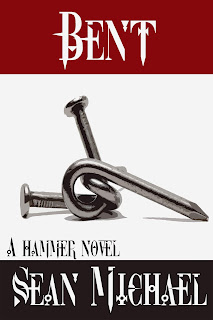 9. Oliver and Jack. These guys don't have their own story - but they appear in countless of the other books. Oliver is the old guard. He's the one who started the Hammer Club. He's the one who trained Marcus. He's not perfect - he certainly makes mistakes like he did initially with his judgement of Tanny, but he is a good man. And he and Jack need each other like whoa. And Jack, my screamer, is very fun to write.

6. Gordon and Frank from Push. Ah, my older couple. Frank first appeared in Billy and Tanny's story. He was just a side character, the PI who helps them out. Who knew he had a story of his own to tell? I certainly did until he poked me and told me to start writing. I do love the pushy ones. These two were fun to write, and they're a pair of very good men who are a credit to their community.

4. Bellamy and Key from Trust. Sweet little Key came to me first, with his sad eyes and his suitcase containing everything he owned in the world. It took no time at all for Bellamy to show up and claim him. I do love it when a Top can help his sub heal and learn to trust again.

3. Simon and Jeremy from Forged. You'll note my top three are the three I have revisited most often in short stories *grins*. This one started off normally enough, I had the fish out of water sub Jeremy and the a little older, established top Simon and they got together and adored each other from the start. Then, to my surprise, Jeremy was injured and lost his legs. That was not the plan, but the characters knew and suddenly Jeremy needed Simon in a whole new way to keep him even and focussed and remind him what he had to live for. It is always fun when a character zigs where you expect them to zag.

2. Billy and Tanny from Found, Snared and Owned. These guys practically wrote themselves. They even pointed out when they were at an end point for that section of the story, which is why they are three long (for me) novels. I do love it when they show up in my head with their stories all right there for me to write down. I still love Tanny's attitude - he cracks me up.

1. Marcus and Jim from Bent.  How could they not be number 1? These guys started it all. I had their beginning in my brain, I could see it clearly, and I sat to write and bam, they just kept going and going and going. At 125000 words, I figured I'd better stop there. It was a good ending and as it was it was so much longer than most of what I had written. There's still more of their story to write, I just need to find the right time to do it. But I loved writing them and when I do the shorter stories featuring them, it's like putting on a comfortable outfit and off they go to tell a bit more of their story.

I watched 3 movies yesterday (Saturday was binging the 2nd season of Westworld,) X-Men Dark Pheonix, Code 8, and Fantastic Beasts: The Crimes of Grindelwald.

I'd wanted to see Dark Pheonix in the theatre, but now that I've actually seen it, I'm glad I didn't spend the money on it. It wasn't a bad movie but it was a little slow. I find the X-men movies very frustrating, because they should be awesome and unfortunately, most of them suffer from the same slowness at best. Also, it doesn't matter what universe of X-men it is - they do seem to love killing off Jean Grey, don't they? Like I said, it wasn't a bad movie, but I did want something more out of it.

Code 8 was one that I saw when looking through what was available on Crave - one of our streaming services this side of the border - and it looked like it could be neat, like it had potential. I fell asleep twice watching this one and didn't really miss anything. So much potential. It was slow, and pretty boring. I hate it when you've got a potential heavy premise and the movie just can't do anything with it. Which is a shame, I could have loved this movie.

I didn't go see Fantastic Beasts the Crimes of Grindelwald in the theatre because I wasn't hugely fussed to after seeing the first one. The best thing about the first one was all the beasts and how Newt is with all of them. And there are quite a few beasts in the first movie. The second movie has a few neat beasts (and I adored the kelpie and especially the chinese dragon) but not nearly enough given that that is my favorite part of these. The rest was honestly a lot of politics. Here's where I say something probably heretical. I am not a Harry Potter fan. I only made it through the first 90 or so pages of the first book, and only lasted that long because everyone was raving about them. It just didn't hold my interest. I saw the movies because I had kids who were the right ages to want to see them. So I'm still not a fan of the world. Which again is a shame because I want to.

Ah well. I did finish all three movies, so that's something (damning with faint praise, maybe?"

Posted by Sean Michael at 10:38 AM No comments: