Well, without my meaning to, the last two guest blog posts I did had food lists - foods I know are bad for me but don't want to give up at Love Bytes Reviews, and top five comfort foods at My Fiction Nook - so I thought I should continue the theme.

So, I was pretty picky as a kid - I still prefer my food not to touch on the plate. If I want it mixed together, I'll do that myself and stuff like stew, I will eat all the potatoes, then all the veggies, then the meat. I'm still kind of picky. Or at least that's what I thought because of my experience as a kid, but when I really think about it - I will try anything at least once and I wind up liking a lot more than I think I'm going to. Still, it's sometimes a surprise to me when I like a food.

10 - Cheddar Jalapeno Cheetos - I always avoided these because I am not a spicy chip fan. Or so I thought. I had a taste once at a get together where these were the only option and I was feeling munchy, so I figured I'd try. OMG. So good. It's chips, I should have known.

9 - Octopus - I didn't expect to like this (although as I like calimari, I'm not sure why) but I did. I've had it prepared both hot and cold and have enjoyed it both ways.

8 -  Mocha cake - I hate coffee - I know, that makes me a weirdo, but I just don't like the taste and I'm not even that fond of the smell, so I have always avoided cake with mocha because usually any cake that has coffee in it makes me go ew. But I had a small tast of a mocha cake at The Keg and wound up having more because it was surprisingly good.

7 - Spinach - I disliked spinach like whoa as a kid. Turns out I actually like spinach raw and somewhat wilted, what I don't like its when it's had the hell cooked out of it - because then it tastes like grass with dirt. But raw or only slightly wilted? Bring it on.

6 - Leeks - not a fan of onions growing up, I was suprised to learn how much I like cooked leeks with butter. Yum.

5 - Pickled Herring - it's fish, I'm not going to like it, I was in my late thirties before I actually tried it. I'm just sorry I waited so long to try it. I also love the onion slivers that are pickled with it. Love it on rye bread. 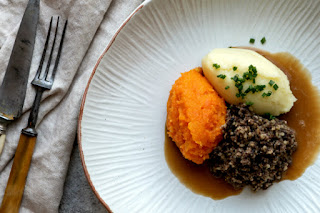 4 - Steak and Kidney pie - kidneys, ewww, right? Actually, if cooked properly they're great and really added to the flavor of this meat pie.

3 - Aloo Matar - this is an Indian potato dish. I like Indian food okay, but I'm very picky about it and I am not the biggest fan of potatoes as a main, nor am I a big fan of tomato based sauce, but whoa, this is delicious and I went back for seconds

2 - Baba Ganoush - I am not a fan of eggplant, like at all. I'd eat it if I was starving and that's all there was, but otherwise no. And yet, somehow, I enjoy baba ganoush.

1 - Haggis. Now granted, if it's not a 'good' haggis, I don't like it. I don't hate it, but I find a lot of times it's very mealy. However. I have had good haggis that I thought was honestly delicious. There's a restaurant here in town called The Highland Pub and their haggis is honestly good.


What foods were you surprised that you actually liked?

Posted by Sean Michael at 10:48 AM No comments:

This story is in the same vein as The Legend of Hercules and Xena the Warrior Princess. Three gods, and a girl posing as a monk go on a search for ancient scrolls that are supposed to save the world.

It's cheesy as hell, and it's all out fun. And with episodes only a half hour or so long, it's easy to move through the whole thing.

I highly reccomend this fun romp of a show.


Sean
smut fixes everything
Posted by Sean Michael at 8:23 AM No comments:

A Tale of Two Movies

Picked up the new Grinch movie. Loved the little mini minion movies that came with it - I love those little yellow dudes of joy.

But the actual Grinch movie? What a disappointment. I turned it off about 20 minutes in. And I LOVE the Grinch. It's like they took everything that was wonderful about the source material and threw it out. Blah.

So instead of watching the rest of that, I watched Christopher Robin. This movie took everything that was wonderful about the source material and celebrated it. It was a beautiful movie about finding your joy again. The pace matched the books, there were many scenes that were essentially from the books. And I loved it.

So, the moral of this story? Don't bother with the Grinch, but give Christopher Robin a chance.

Posted by Sean Michael at 2:00 AM No comments: