I`m not sure I actually like ten ice cream flavors enough to put them in my top ten, but I`m going to try!

10. Chocolate - Okay, so I included it because I couldn`t think of a different flavor that I liked, but honestly, I`m not a huge chocolate ice cream fan. It`s too much chocolate and half the time you can taste a little bit of whatever it originally was leaking through. 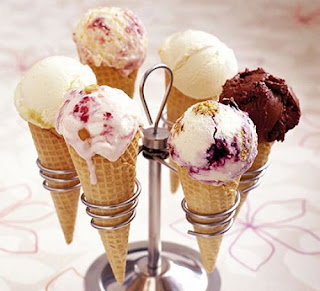 9. Butterscotch Ripple - I don`t know if this flavor still exists but it did when I was much younger.
8. Rainbow sherbert - all the colors of the rainbow in an icy ice cream like substance
7. Maple Walnut - I do like nuts in my ice cream
6. Orange sherbert - I love sherbert as an alternative to milk based ice creams65. salted caramel - this would probably be higher on the list if I had had it more than once and could get it on a regular basis
5. Vanilla -  color me boring, but I love vanilla ice cream - both regular and `french`
4. Pralines and cream - this is my go to when butter pecan is not avilable
3. Lemoncello gelato - they had this at the hotel where RT was held. So good.
2. lemon ice - they used to have this at Farm Boy and it was so wonderful and sour.
1. Butter Pecan - not always easy to find and often not at the ice cream counter, this is nonetheless my absolute favorite ice cream flavor.

I think maybe I need a cone (regular not sugar, please) of butter pecan...


Sean
smut fixes everything
Posted by Sean Michael at 1:30 AM No comments:

Picked up a copy of Pacific Rim 2: Uprising on blu-ray.

I had heard this was terrible, so I wasn`t expecting a whole lot. I have to say that I was pleasantly surprised.

The relationship between the two main leads made the movie for me - they had great chemistry together and their back and forth annoyance with each other really worked for me. Also, the doctor was once again a great addition to the movie (I`m sorry, I can`t remember anyone`s names at the moment).

As a writer, I love the idea of the neural link needed to `drive` the robots and I think that would make an amazing story. Two guys who fall in love through the neural link and have to deal with that. All sorts of built in angst - maybe they don`t like each other to start with. Maybe relationships within the company are not allowed. Maybe they`re worried if they leave stop sharing the neural link, they won`t feel as much for each other. It would definitely make a great story.

I loved that the bad guy was not who you thought it was.

All in all, it was a fun movie with robots fighting giant monsters (and come on, that`s fun just by itself).


Sean
smut fixes everything
Posted by Sean Michael at 1:00 AM 1 comment:

There are going to be some spoilers here, so please don't continue on if you don't want to hear spoilers for Avengers Infinity War.

I had managed to keep myself spoiler free except for one thing that made me less eager to see the movie.

it wasn`t a complete movie.

So I knew things were going to end on a cliffhanger.

It still pissed me off when it happened.

Which was a shame, because up until then I really loved the movie. But I`m not going to be satisfied until I have seen the second part of it next summer.

And I have to say, it does grill my shorts when movies do this. If it`s been left at a good point, I don`t mind. But an all out cliffhanger? Yeah, not such a happy camper here. At least give me an okay for now ending. At the end of Infinity War things are NOT okay.

I liked a lot about the movie - it held my attention tightly and was a real break from all the work I have to do - I was not sitting there stressing over stuff and thinking I shouldn`t have gone to the movie like I was with Deadpool 2.

I loved seeing everyone from all the movies, seeing how they all fit in with each other.

I thought that Peter Parker matured a fair bit in this movie - but not so much he still wasn`t a teenage boy (and Peter is legitimately a teenage boy, so I appreciate that he acts like one).

How much do you think Peter Dinklage loved being the tallest character for eons in his scenes?

I loved that the Hulk wouldn`t come out. He was done being used whenever they needed a behemoth to fight for them.

That Starlord is such an boy, lacking confidence and acting out about it. I suppose it fits his character as he was stolen away as a young teenager, but it still irks me. A number of the Guardians characters are still more charicatures, very one-dimentional.

Yo, Thanos - you know what the fatal flaw in your click of the fingers and bring the universe in balance again plan is? Give the universe some time and you`re just going to have to do it all over again and are you really okay with that? With having to destroy half the entire population of the universe on a regular basis? Now that you have all those infinity stones how about putting some thought into a different solution?

So a very good movie up until the last five minutes. I won`t be happy with it until I`ve seen part two and it has an actual ending.

Posted by Sean Michael at 11:11 PM No comments:

Not Going to RT Contest Winner 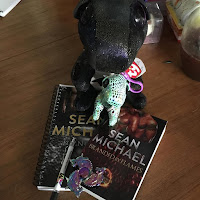 Congrats to Lady Beatrice (I have already sent you an email). She is the winner of the Not Going to RT Contest!

Sean
smut fixes everything
Posted by Sean Michael at 9:10 AM 1 comment:


Sean
smut fixes everything
Posted by Sean Michael at 8:58 AM No comments:

I thought I'd have a little light fun today and do my favorite animals.

10. Sloth - this is half my spirit animal, so I had to include it! (a unicorn is the other half)
9. Elephants - between the slow gait and all the wrinkles, I always feel like they are the wise elders 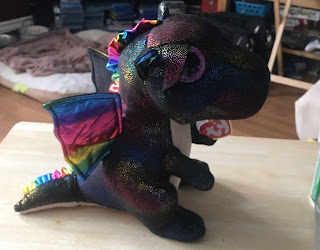 8. Giraffe - I love the long legs and longer neck, the graceful way they move despite that.
7.  Wombat - I have always loved all things Australian, including this rolly polly beastie.
6. Moose - they're so majestic and yet so ungainly at the same time.
5. Dogs - especially my Bacon.
4. Snow Leopard - I'm for winter in my animals as well as weather ;)
3. Polar bear - see?
2. Unicorns - they do too count!
1. Dragons - just like the unicorn, they do too count.
Posted by Sean Michael at 12:10 AM No comments:

There are so many movies out this summer that I want to see - many of which have already been released. Unfortunately I haven't had a chance to go to any until last weekend. I needed a sanity break and went out to see Deadpool 2. Yeah, Deadpool and sanity maybe don't belong in the same sentence ;)

I enjoyed the movie, but I have to admit to being somewhat disappointed. I loved the first movie and I didn't think this one lived up to it.

Now, I was tired, cranky and stressed, so it's quite possible that once it comes out in Blu-Ray and I watch it again, I'm going to like it a lot better. Also, I had more expectations for this one than for the first. I really do need to remember not to go into movies with high expectations because that almost always leaves me kind of disappointed.

But, as I said, I did enjoy the movie. I do love the way Deadpool constantly breaks the fourth wall.

Posted by Sean Michael at 1:30 AM No comments: