As promised - here's a smutty excerpt for Haunted - coming October 27! 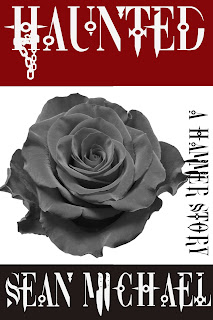 Will Halloween bring a trick or a treat for two lonely men?

Rusty’s had a hard time of it. Six months ago he walked in on his master with another man in their bed and left with little more than the clothes he was wearing and his laptop. Since then he’s been staying with Marcus and Jim, working and saving up for a place of his own. When Halloween rolls around, he’s not feeling the spirit of the holiday, but Jim and Tanny convince to come to the club with them.

Master Karl loves coming to the Hammer’s Halloween party as it marks the end of his work year. A designer and builder of haunted houses, he spends most of the year on the road for business with November and December as his time off.

Marcus and Billy invite Karl to join their table at the Halloween party and he’s attracted to Rusty immediately. When sharing a meal leads to a dance which leads to Rusty going home with Karl, it could be the start of something special for both men. Can some Halloween magic bring Karl and Rusty the happy endings they deserve?

Karl hadn’t gone to the Hammer Halloween Night expecting to go home with anyone. He’d wanted to spend Halloween with people rather than on his own. He’d never expected to come home with a treat, but that’s exactly what had happened. Lucky him.

He opened the door to his penthouse apartment and ushered Rusty in.

The sweet man was pale and lovely, with dark red hair and sherry-colored eyes, and a need that called to him. And as Rusty went in ahead of him, he noted that that sweet ass was round and pert.

Oh, he would like to get his hands on that. In fact, he ached with need.

He left the door open. “Before we go any farther, I need to know your safeword.”

“Yellow and red. Perfect.” Nice and easy to remember. There wouldn’t be any question.

“Would you prefer to simply make love tonight?” While a scene would be lovely, so would being simple—making each other feel good and come. If they were as compatible as he believed they were, there would be plenty of time for scenes.

“I don’t know. I wasn’t— I wasn’t planning on this.” Rusty looked at him, expression unsure and a touch lost.

“Neither was I—what a wonderful surprise for both of us.” He closed the door and locked it, then turned back to Rusty and took charge. Cupping Rusty’s cheeks, he brought their lips together for their second kiss. The first had been delightful, this one even more so.

Rusty relaxed, obviously eager for the lead, for the attention, for him. He slid his tongue across Rusty’s lips, asking for entrance. Rusty opened for him, letting him in, and when he found the piercing in the boy’s tongue, he groaned.

What a delightful surprise. He slid his tongue across it, flicking it back and forth.

Rusty played back, teasing him, the touches maddening and wonderful.

Karl smiled into the kiss, sliding his tongue along the roof of Rusty’s mouth. One warm hand snaked around his waist, holding him.

That made him hum and he pressed closer. Rusty felt good against him. Small and compact, but solid, firm—Rusty was a little hard body under all those oversized clothes.

Groaning, he slid his hand from the top of Rusty’s back all the way down to his ass. He loved how Rusty rolled back toward his hand, rocked right into his touch. Humming, Karl pulled Rusty back to him so their bodies rubbed. Oh, that felt nice. Good.

“Pretty baby,” he murmured, then dove back in, kissing Rusty hard enough to bend him backward.

Oh, he liked this boy. He liked Rusty a lot. A whole lot.

He wanted to see what was under that shirt. He wanted to know if Rusty was smooth or fuzzy, if there were more piercings.

“Come to my bedroom.” He took Rusty’s hand and led him down the hall.

Rusty didn’t hesitate at all. He followed next to him, pressed close beside him. Rusty fit, like there was a space next to him, made for him to hold this boy.

God, he was losing his damn mind. He wasn’t the love–at-first-sight type.

Still, here he was. And here was Rusty. He led the way to his bedroom, eager to get to know Rusty so much better.

“You have a lovely bedroom.” Rusty chuckled softly. “I was almost expecting a bed made from bones.”

“Wouldn’t that be fun? One day, I’ll build my dream home and I’ll keep that possibility in mind.” He chuckled and turned Rusty to him. He wanted another kiss. He wanted much more.

“Hello, Master Karl.” Rusty stepped right into the curve of his body.

“Mmm. Hello, Rusty.” Bending, he took his kiss, letting his eyes close as their lips moved together.

Rusty melted against him, one soft moan after another pushing into his kiss. He cupped Rusty’s face, turning his head slightly to deepen the kisses, to make them more. Their tongues battled, sliding against each other. That piercing was exciting, giving everything a new twist.

It was like a secret, like a little whisper just for him. He let his hands wander now, sliding over Rusty’s shoulders first, then down to the hard little hidden, pierced nipples.

Score! More piercings. How exciting. He stroked gently, feeling the metal through Rusty’s shirt. He loved the way the boy’s breath hitched, proving how the touch affected him.

He found the bottom of Rusty’s shirt, eager to touch skin.

The huge shirt came up and off easily, exposing a hairless chest, the dark ink of a set of spiky roses covering the pecs, sweet nipples pierced with rings.

“Pretty baby.” He traced the tattoos, sliding his fingers on the warm skin.

He didn’t think Rusty had heard praise in a while.

He took one of the little rings between his fingers and tugged on it, and Rusty went up on tiptoe. Gasped.

Oh yeah. He did the same thing to Rusty’s other nipple, the metal hot between his fingertips.

“These are a treasure, boy.” It seemed everything about Rusty was a treasure.

“Thank you. They feel so good, you know?”

He loved Rusty’s easy acceptance of his needs—his awareness of what the piercings brought him. “They look good too.”

He went in for another kiss, his fingers remaining fascinated by the piercings. He touched them and played with them and tugged them, giving Rusty different sensations.

Forget compliments, he thought it had been a while since Rusty had been touched like this. “Has it been long?”

“Since I had a master or a lover?”

He considered for a moment, then decided he wanted to know. “Both.”

“Six months ago, I found my master was sleeping with another man, so I understood why he hadn’t wanted me for a year.”

“I left. I had my shoes and my wallet and phone. I don’t know what I did wrong. Even now.”

“How awful. Has he never tried to get in touch with you? Apologize? Explain? Make sure you had the rest of your things?” The man sounded like a real asshole.

“I’m so glad you had friends to help you. That’s… the lowest. In the end, you’re better off without him.” Karl firmly believed that. If people didn’t treat you right, they didn’t deserve you.

“I just hope whatever I did, I don’t do again.”

“You’re assuming it was something you did. It takes two to tango, and clearly, he did something wrong. Very wrong.” Sweet baby boy. No one needed that sort of mindfuck.

And now he was going to make Rusty feel good and forget that asshole. He brought their mouths back together again, sliding his tongue in to play with that sweet little piercing.

Who could let this gorgeous man just walk away? Somebody stupid.

The thought amused him, and he smiled into the kisses. He wasn’t stupid, he could see the potential in Rusty, could taste the need.

Rusty rubbed against him, body hard, wanton, and needing. Rusty didn’t need a scene right now, he needed to be loved on and that was what Karl was going to do.

He was going to adore this boy, prove to him that he was worth something.

He stroked Rusty’s shoulders, wanting to leave tingles and need in the wake of his touches.

“Feels good. You have great hands.”

“Thank you.” He let said hands drift down to Rusty’s waist, playing with the waistband on his jeans and teasing them both.

Rusty sucked in, his belly drawing in tight. He played with Rusty’s abs for a moment, enjoying the feeling of them beneath his fingertips. Sexy boy.

He teased, letting his thumb drop down to stroke the sweet cock through Rusty’s jeans. He couldn’t wait to feel it skin against skin. He popped the top button open and teased the zipper down as slowly as he could. “Do you have more piercings, boy?”

He groaned right then and there, without even seeing them. He pulled Rusty’s jeans open to the sides, then tugged them down, eager to discover Rusty’s jewelry.