I'm giving a sneak peek today of my Hammer Auction book for this year. I sat down to begin writing and who turned up to be a part of it but Xavier, the man who runs the club. I have had lots of requests over the years for his story, but he's been stubborn and I didn't even know what his story was. So I was thrilled to learn more about him and to share it with you.
Treasured
It’s that time of year again and the Hammer Club Christmas Auction is in full swing, the holidays ready to work their magic. 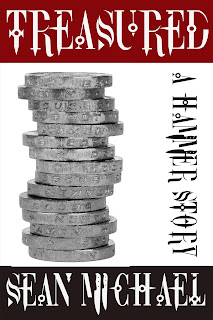 Fifteen years ago Xavier watched his one true love walk away, unable to follow the man on his need for adventure. In those years, Xavier has made a life for himself as manager of the Hammer Club. He has friends, he has purpose, he has joy and happiness. What he’s never had is a lover, his heart still taken.
This year, as he watches the auction, keeping everything flowing smoothly, he’s happy for all the couples, new and established, who are coming together and raising money for charity. The last thing he expects is for Marcus to announce a name he hasn’t heard in fifteen years.
Tyr didn’t want to leave Xavier behind all those years ago, but he knew if he settled down instead of going, he’d always wonder what if. Now that he’s back for the one thing missing from his life, will he be able to convince Xavier that this is real and not just the magic of Christmas?
pre-order links:
Amazon
Kobo
Excerpt:

Marcus and Billy were having a ball, running the holiday auction, with Jim and Tanny playing fluffer in the back of the house.

Xavier watched the money roll in, the subs and Doms pair up, and he couldn’t help his smile. So many great memories from the last fifteen years he’d been here.

Drew, one of his waiters, came up with a platter of food. “Are you hungry, Sir?” The boy was flirting with him outrageously.

“I’m not, boy. Thank you. You might see if Tanny or Jim are though.” He was ready for his vacation.

Drew looked disappointed that he hadn’t gotten the response he’d been hoping for, but he moved on, taking his tray of food toward the back where Jim and Tanny were working.

“We have someone new on stage tonight,” Marcus said from his spot at the corner of the stage, looking at his notes.

Oh, this was always fun. Always. Some pretty little twink finding a night of fun. And sometimes their special someone. The magic of Christmas.

“Ready to whisk the lucky winner away for a dinner at the very romantic Blue Skies restaurant, this is Tyr.”

Xavier frowned and glanced over at the stage. He didn’t know a Tyr, or he hadn’t in a long time.

The man who came out was no shy twink. No, this guy was a stud. Wearing only a tight pair of beat-up jeans, this man was tall and blond and boasting a magnificent chest and gun-show arms.

No. No, that was his lover. His. He hadn’t seen the man in fifteen years, but that didn’t make it any less true.

“Is there an opening bid?” Marcus asked.

“He’s not for sale.” Xavier’s voice rang out through the club.

Dead silence fell over the club, and everyone’s head swiveled to stare at him, mouths dropped open. Not Tyr’s though. No that fine fucking son of a bitch was grinning like a loon.

It was Marcus who finally broke the stunned silence. “Xavier?”

“I said, he’s not for sale.” Xavier held Marcus’s gaze, and he didn’t back off it. There was no way he was playing a game, not with Tyr close enough to see.

Marcus nodded. “Very well. Sorry, ladies and gentlemen, we’ll be moving on to the next auction item. This is Brandon, a boy looking for a Dom for the night. It’s his first time…”

Marcus’s words faded for Xavier as Tyr jumped off the stage and headed toward him.

He watched every step, admiring the sight of the man that he had thought was his Mr. Right. He’d been wrong, but still—

Tyr was here. In his club. His. Club. There was no way that was a coincidence.

Tyr came to stand in front of him, and Xavier nodded. “Beer?”

“This first.” Tyr grabbed the hair at the back of his head and tilted him, then took a kiss that Xavier felt down to his bones. Hard and slow. Time stopped.