I put Unlikely Hero back up on Kobo and Amazon - and it finally turned up on Amazon! So yay!

Unlikely Hero was a lot of fun to write, between the kidnapping, the former lovers, the kid, the hurt/comfort, it's got a little bit of everything in it! There's an excerpt below, and I'll do a smutty excerpt from it on Saturday :)

When his three-year-old daughter is kidnapped, Eric Wilson doesn’t have many options, and time is running out. With nowhere else to turn, he reaches out to his ex, influential businessman Brock Vencenza, whose money and contacts might be able to save Josie. 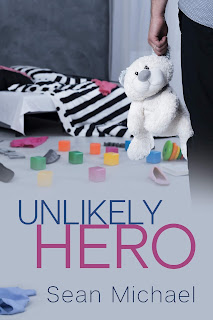 Brock never got over Eric’s loss, and he’s more than willing to help when Eric needs him most. Together with law enforcement and private security, they embark on a twisting investigation to find the little girl—and who wants to hurt her and destroy both men in the process. Under the circumstances, confessing he still has feelings for Eric would be inappropriate, but Brock can’t deny what’s in his heart. He doesn’t know if their love can be rekindled or if he can even protect Eric and Josie. But one thing is certain: Brock’s determined to be the hero in reality that he is in Eric’s eyes.

Originally released by other publishers.

BROCK VENCENZA glad-handed the board members, smiling and nodding, making all the right noises. He just had to wrap this up and then he was off to the Cayman Islands for some richly deserved R & R. Deep-sea fishing, baby.

He saw the last concerned stockholder out the door and headed for his desk, closed down his computer, and tossed a few files into the in-box for Stephanie.

Speak of an angel; his intercom buzzed, Stephanie’s voice coming next. “Brock, there’s an Eric on the phone, says he has to talk to you. He won’t even give me his last name, sir.”

Brock frowned. Eric? Now there was a name he hadn’t heard in a while. Years. A lot of years. Enough years that it couldn’t be the Eric his mind had automatically pulled up.

“It’s probably just a salesman, Steph. Tell him I’m on vacation.” His yacht was calling to him. Calling.

“I already did. Brock, he sounds too upset to be a salesman.”

Brock growled. “Fine. Put him through.” Steph was getting soft if she couldn’t put off a nuisance call. He pressed the button for the outgoing line and barked out his name.

“Brock? Brock, it’s me. Please, love. I need help.” It was his Eric—his silly, goofy, soft-hearted, ridiculously idealistic to the point of absolute fucking madness Eric—with hysteria in his voice.

It might have been nine years and Eric might have dumped his ass hard, but Brock didn’t even hesitate. “What do you need?”

Brock stood and grabbed his briefcase. “Where are you?”

“I’m downstairs. The security guard wouldn’t let me in. Please, Brock. Josie’s only three. She’s got to be so scared.”

“Don’t move. I’m on my way.” He hung up the phone and nodded to Steph as he passed her desk on the way to the elevators. “I’m off. You know the cell number if there’s an emergency.”

He nodded to her again as the elevator came.

Two minutes later he was in the lobby, scanning it for his ex. God, nine years. That was a lot of fucking water under bridges that were long ago burned.

Eric Wilson stood there, looking completely out of place in the glass and steel modernity of the lobby, reminding Brock oddly of the Scarecrow from Oz—still as skinny as always, dressed in a button-down, a pair of khakis, a ball cap. Jesus. The man had no fashion sense and was all arms and legs and nose and huge blue eyes and…. Right. Zero fashion sense.

And he looked like he was stressed to the gills.

“Brock.” Eric ran over to him, face drawn, eyes shining. “Thank you. I’m sorry. I just… I didn’t know where else to go.”

He put an arm around Eric’s lean shoulders and pulled him in for a quick, hard hug. “No problem, baby.” He drew Eric into a quiet corner. “Have you called the cops?”

“No. No, the note said they’d kill her. I just… it’s been almost two hours.” Liquid baby blues stared at him, pupils huge.

“You have the note?”

“I do.” Shaking fingers handed it over, the words already smeared with sweat.

“Okay, you need a scotch.” Or a Valium. Maybe both. “Come on.” He grabbed Eric’s arm and led him out to the parking lot where his Lexus waited.

“What—what do I do? I don’t….” Eric walked beside him, staying close. “God, if something happens to her, I’ll never forgive myself.”

Brock opened the passenger door for Eric and then went around and got into the driver’s side. “We get you a drink. We pick up the money. We get my people on it.” He unlocked his cell phone and dialed the number for the company that did his security. He was friends with the owner; Gordon was a good man.

Eric clicked his seat belt on, reaching for his wallet.

Brock looked at him. “What are you doing?” Before Eric could answer, a cool woman’s voice said, “Bidden Security, how may I direct your call?”

“Anita? This is Brock Vencenza. I need to speak to Gordon. It’s an emergency.”

“Of course, Mr. Vencenza. Right away.”

The line went quiet, and then Eric handed over a picture of a beautiful, laughing little Chinese girl. “This is her, about a month ago.”

He handed the picture back and squeezed Eric’s hand. “It’s going to be okay, baby. We’re going to get her back.”