As promised, here's a wee smutty excerpt from Totally Covered for your Saturday enjoyment :) 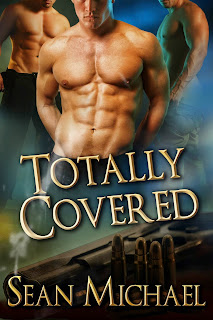 Mal has been Burke and Darby’s sub for a lot of years. As an undercover cop, he needs the release his once a quarter visits give him. Burke and Darby get a lot of out of the visits, too. Both Doms, it’s important for them to share a sub now and then to keep them on an even keel.

All that changes, though, when Mal is shot on the job and needs to stay with Burke and Darby during his recovery. Can his Doms bring Mal out of the funk his last undercover stint has left him in? Or will the three of them finally go their separate ways?

Find out in this second edition of Totally Covered.


Dar tugged Mal to him, mouth dropping onto Mal’s as he took the kiss he’d been wanting for weeks.

Oh, God. His boy. Their boy. Moaning, he tugged Mal in close, his hands holding onto that perfect little ass.

So patient. They’d been so fucking patient. He couldn’t wait anymore, he couldn’t stop kissing and holding and rubbing against his boy. He wanted to touch, to taste every inch, to eat Mal alive.

Key stepped up behind Mal, moving Dar’s hands away, so the little swim trunks could be pulled down. He grabbed that skin as soon as it was bare, though, squeezing hard. Key pressed up against Mal, pushing the lean body into him. He reached up, fingers tangling in the long, wet hair.

Dar pushed his knee between Mal’s legs, spreading them, pushing at the sweet balls. Key began to rock, pushing Mal into Dar again and again. Mal’s cock started to fill, and Dar wanted to crow.

He bit at Mal’s lower lip, at his tongue. Not hard, just enough for Mal to feel it. He felt Mal’s hips roll, buck against him. He wanted to howl in triumph. His needy boy.

Key’s hands started moving Mal, rocking the three of them together.

Dar broke the kiss, looking into Mal’s eyes. “You. Once. And then the ring goes on.”