Smutterday - If You Really Go Demon

As promised, here's a smutty excerpt for If You Really Go Demon! Now 15% off the regular price at Changeling Press! 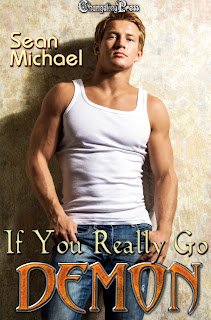 If You Really Go Demon

Griff has been living with a terrible secret for centuries. He’s a high demon, but he has wild needs and desires to be a pleasure demon -- to submit to another. Such things are forbidden in hell, but he finally breaks down and confesses his desires to his best friend Savilry, risking not just their friendship but his own safety.

He could never have dreamed Savilry’s response, and Griff will never be the same again.

“You said you wanted a master. Show me that you mean it.” Sav sat back a little on the couch, spreading his legs. Griff couldn’t miss the nearly hard cock in Sav’s gauzy pants.

Could he do this? Could he kneel before Sav, take that heavy cock in his lips?

Sav was still rubbing Griff’s horn, and the act made his eyes cross, made him slip between Sav’s thighs like a lower demon who was made to pleasure his master.

“Maybe there’s something to these visions of yours.” Sav opened his thin pants with one hand, fat cock popping up and slapping Griff in the face.

Sav gave him an arch look, like his best friend was daring him to say no. To laugh and refuse, or just run away maybe.

He wasn’t a coward, though. He’d lived with these dreams for a century; he could do this. There was no shame in pleasure. He leaned down, tongue dragging over the fat, swollen tip, the flavor there shocking, electrifying.

Sav moaned for him, the sound low and luscious. And Sav kept stroking his horns, fingers moving slowly along them. Griff closed his eyes, his suction increasing as his need did.

“Such a pretty demon. I’ve been jealous of your coloring for years.”

He flushed darker, hotter, and he pulled harder on the flesh in his mouth.

“Beelzebub, you’re good at this. Have you been doing this on the sly?” Sav’s words were husky, needy.

“Well you’re very good at it, Griff. Like so good. But you stopped.” Sav pouted.

“You asked me a question!” Of course he answered.

He didn’t want to, but he liked it when Sav ordered him around like that. Sav’s finger’s dug into the heavy braids around his horns, claws massaging him down deep.

The praise made him beam, made him suck hard, striving for the kind words again. Drop after smoky drop of pre-come slipped from Sav’s cock to land on his tongue.

He could learn to crave it, that flavor, the touch of Sav on his head.

“Suck harder. You’re making me buzz and it feels good.” Sav’s voice poured over him like honey and he sucked harder.

Sav began to thrust, pushing up into his mouth, and making little noises. The fingers around his horns squeezed and released, the sensation making him gasp. He was so unbelievably hard and every moment increased his need.

His hips began to move, to hunt for friction against the fabric of his pants.

He braced himself, swallowing hard, over and over -- he wasn’t backing off now.

Sav cried out for him and seed poured down his throat. It was shocking. It was salty and smoky and sweet all at the same time. Sav’s fingers dug into his scalp, into his horns, and he continually swallowed convulsively.

Griff rested his cheek on Sav’s thigh, his cock aching with his need.

“Wow. Seriously, Griff. You are very good at that. And your enthusiasm… yeah. You’ve definitely been thinking about it, haven’t you? A whole lot.”

He ducked his head and pulled away, forcing himself to stand. “I should probably go, shouldn’t I?”

“Sit down, Griff. You need to deal with that erection you’re sporting before the skin splits.” Sav leaned forward, dark eyes shining. “I could help you with that.”

“You want me to take you?” Sav asked, licking his lips. “Or do something  simpler?” Sav didn’t specify which of those options he would prefer.

Griff moaned, his knees buckling. “I --” How did he answer that?

“I’d love to fuck you if that’s what you want. I mean, you did say you wanted to take it, right?” Sav patted his cock, which had barely gone down at all post-blowjob and was looking like it was going to head back to hard.