Today on Throwback Thursday are Need and Chosen. Need was my first vampire romance and Chosen was the follow-up. They are currently on sale for 99cents for Halloween month. 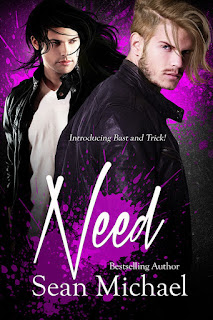 When Bast picks up Trick, a street hustler with few prospects, Trick is prepared to play along, to have some fun. He figures he’s got a good thing going with free room and board, so why rock the boat? What he’s not prepared for is falling in love. Good thing for him the obsession is shared on both sides, Bast falling for him just as quickly, needing him just as much as Trick needs Bast.
Trouble waits just around the corner for them, though. Bast is far older than Trick can even imagine, and has another lust that’s just as pressing as his love for Trick. Trick thinks it’s all fun and games for a while, but he learns soon enough that certain things about Bast’s life are deadly serious. And deadly.

Will Bast’s vampire nature drive them apart? Or can Trick accept that need takes all forms, and give himself to Bast completely? Find out in the Sean Michael Classic.
Only 99 cents at Amazon (also available on KU) 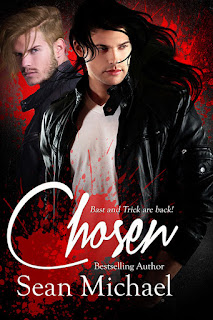 Vampire Bast and his lover Trick are still alive, or not, and kicking in this sequel to Need!

Still very human Trick is dealing with the difficulty of having a lover who can't go out in the sun, Bast is trying to accept the changes the world throws at him, and they're both working on understanding the bond between them.

Trick has asked Bast to feed on him alone, and while that's easy enough for Bast because of his deep love for Trick, it causes all sorts of complications. Their friends don't really understand what happens when Bast feeds on Trick, worried that Bast will somehow do his lover harm. Trick figures they're just jealous because he has Bast and they don't, but it could cause serious problems for the pair when their old crowd starts threatening to take Trick away.

To make matters worse, Trick knows he's not getting any younger, and he's starting to worry that he won't be able to keep Bast happy, or fed, for the rest of his life.

Can Trick and Bast settle the problems that seem to follow them? Or will they fold under the pressure of being a vampire and his Chosen? Find out in this Sean Michael Classic.
Currently only 99 cents on Amazon (also available on KU)
It's almost Friday!
Sean
smut fixes everything
Posted by Sean Michael at 12:30 AM